The little guy is a voracious reader. One of his latest favourite is this series – “Compton Valance”. 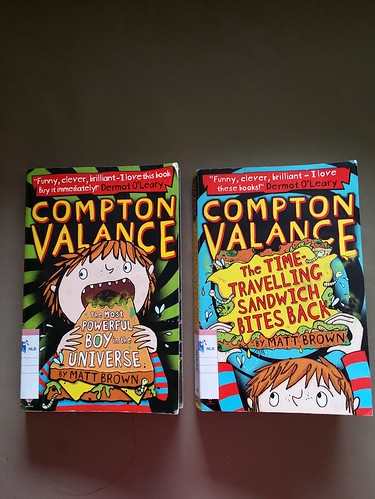 It’s about time travelling where the time machine is an old cheese and pickled sandwich! It’s random and pretty funny with lots of cartoons included as well! It tickled the little boy’s funny bone.

I finished the book “My sister’s keeper” over the weekend, where I cried buckets. Imagine you are a “designer baby” Anna born specifically so that you can donate whatever that is needed for your sister who has leukemia since she is two. You are thirteen now and you finally decide enough is enough and sue your parents for the right to your own body. What is right, what is wrong, what is moral, what is selfish…all these are explored and from each person’s perspective. A kidney is needed next, Anna who thinks that “I am important too!”, Sara – the mother who is doing everything she can to keep a child alive, Kate – the sister who is sick is perhaps thinking something else altogether!

I admit I was puzzled as to how someone could suddenly turned so selfish and I was speeding towards the end without really savouring the journey. But the revelation of why Anna was doing it was so startling but it also felt so right and the ironic ending at the end just blew me away.

Yesterday I popped in the disc to watch the movie and boy! did i cry more! The movie had a different ending altogether and until now i can’t quite decide which ending i like better. But this reminded me of a movie between sisters/friends “Beaches” with that theme song “Wings beneath my wings” which made me cry like mad too! To perk myself up, what I have in my bag now for my mrt reading is “confessions of a shopaholic”, comedy I am told. Let’s hope it will work its magic!

Ever since I’ve seen the LadyBug in person (in the course of my work) I have been besotted and half dying to get my hands on her. Problem is that it is still not sold in Singapore and since I am not a great fan of waiting, I went ahead and had it shipped to Singapore from the US.

The Ladybug is an ipod/iphone docking device and simply looks fantastic. If you remember I already have an ihome paired with my 1st gen ipod in the little girl’s room and in terms of looks, the Ladybug is way ahead and in terms of sound, its decent in fact better than decent! Well I won’t say its extraordinary but at that price point (about US$60) with that kind of looks, I am a happy camper.

It looks like a cute little red ladybug with wings folded up when not in use. The speakers fan out to reveal the docker. To boot, it even allows batteries to be used so its going to be extremely mobile.

I have the little insect paired with my ipod video and happily installed in my room and I am looking forward to many hours of music and sermons and podcasts! Woohoo!

We recently got our hands onto 3 board games published by Hasbro – Monopoly Deal, Rummikub and Risk. Our family has always been a fan of board games and not just the usual ones but the Euro ones. We have Settlers of Catan, Citadels, Ticket to ride, Puerto Rico, Ark of the Covenant and St Petersburg. Euro games are very different from your usual American ones. It normally needs you to strategise, downplays luck and conflict and is highly interactive. Board games are such a great way for a family to spend time together. Anyway back to our three new games, we thought we will give Monopoly Deal a try first. It wasn’t nothing like monopoly at all, I mean monopoly isn’t really the most exciting game to begin with but monopoly deal is a lot more fast moving. Here’s how you play. To win, collect 3 complete property sets. Each player starts with 5 cards and you draw 2 more cards when its your turn. Then you can play up to 3 cards by either putting money/action cards into a personal bank, putting down properties, and playing action cards from your bank into the center. There are a lot of action cards. Some examples are steal an entire set, force a property swap, force rent, double the rent etc. This would be the perfect little game to bring with you when you go out for a picnic or even on a trip.

Next we tried Rummikub! Oh boy! this one is even more fun. It involves a lot more thinking though. There are many tiles of different numbers. To win, you have to throw out all your tiles but you can only throw out your tiles in a set of minimum 3 tiles and rules are the if the numbers are the same, they must be different colours and if they are running numbers, they must be the same colours. To throw out tiles for the first times, all the tiles must add up to at least 30. The fun begins when you start to mess up and reshuffle the tiles already thrown out so that you can somehow throw out one or two of your own tiles, We played and had such a good time! And we were glad that these games were as fun as the Eurogames that we loved to play.

(Kevin: That was Talia’s little hand in the last pic, picking up a ONE for daddy )

For a couples of months now… I’m slowly getting used to and falling in love with my MacBook. A recent Win XP notebook’s harddisk crash accelerated my full conversion to the Mac OS.

Earlier part of the year, Jaime imported her iPhone and during her confinement, the iPhone became her portable web browser & movie screen. Even Talia Ann had mastered the art of flipping through the photos on the iPhone with her tiny fingers.

With the better substitute, Jaime’s iPod Video became mine and my iPod classic was left collecting dust.

So we bought a iHome Stereo Clock Radio with iPod docking station for Talia Ann (her old aiwa mini HiFi no longer plays CD). Anyway, we stored all of Talia’s favourite songs into the iPod and also some songs from a few praise & worship CDs that we have not played to her.

One afternoon, I saw her dancing in front of the iHome Stereo with actions I’ve never seen. She was dancing in rhythm with the Praise & Worship song. She was so cute! Did she learn those actions in her sunday school? I wonder…..

Before my harddisk crashed on my win XP notebook, I was already getting very sick with anything ‘window’. Jaime bought a notebook with Vista last year and for countless times we wanted to throw the retarded vista infested notebook out of the window.

We need change! The change to Mac OS is refreshing, the change to iPhone is inspiring and the world without microsoft seem to be a much better place.


Talking about “We need Change!”, I’m so excited that Obama won. I supported his call for change a few weeks after he decided to run for presidency. It was via Facebook that I first learned about him (it was a few days after my birthday last year) and thanks to facebook who supported his campaign, this poorly funded movement gain momentum. This man who decided no to suck up to lobbyist in Washington ended up attracting more funding than any presidential candidates.

The change is refreshing! It gives hope to all, not that he will be a great President, but rather nothing is impossible. Not your race, not your color and not where you came from.

Such changes render the justifications for our GRC system useless and primitive. Do we really need a GRC to have minority race MPs in the parliament? Incomptent ‘yes men’ maybe….

True leaders that inspire get voted in regardless of their background when there is a fair playing field.

I was so overjoy on 5th Nov 2008 when I watched Obama addressing his nation on youtube that I can’t stop shouting “Obama! Obama!” with my arm raised. Soon, Talia Ann sensing my emotion started shouting “O Papa! O Mama!”, “O Papa! O Mama!”. She was so charming and sweet…I hugged her, I love her so much that I want change to come on my nation.

As her father, I will inspire her to be passionate for a cause that she believes in and go for it.

Now, back to my little Mac family. I’m seriously thinking of adding more Mac to our home network and maybe eat further into SingTel’s profit but picking up a ‘subsidised’ iPhone.

There are so many amazing things you can do with the iPhone. Do you know that you can actually turn your iPhone into an Ocarina, an ancient flute-like instrument (Wikipedia: Ocarina)

Watch these people playing Stairway to Heaven with their iPhone.

Ocarina (by smule) is the first true musical instrument created for the iPhone. Ocarina is sensitive to your breath, touch and movements, making it even more versatile than the original. Unlike other musical applications, there are no pre-compiled riffs so musicians will find unlimited opportunities for self-expression. But you donâ€™t have to be formally trained to appreciate this enchanting instrument.

For beginners, Smule provides an interactive tutorial on its website. It is so easy, anyone can play, even if you donâ€™t read sheet music.

Ocarina is more than a musical instrument, it’s also a social application. Check it out yourself Ocarina .

Ever imagine you can turn your mobile phone into a connected device and also a musicial instrument? Change is coming and more change will come…..be ready for CHANGE!

I found a nice version of the original classical Pachelbel’s Canon and while listening to the tune, it brought back memories of watching Jaime walking down the aisles in her wedding gown.

Maybe we’ll use DEPAPEPE‘s version during our 10th anniversary march-in together. Enjoy!

Both Jaime & myself were separately charmed by the Lomography sub-culture and decided to venture into the world of the “unknown“.

To me, the uniqueness about lomography is the factor of unknown result. Basically, You’ll never know what you’ll get. And it’s that uncertainty that makes it so charming.

Lomography emphasizes casual, snapshot photography. Characteristics such as over-saturated colors, off-kilter exposure, blurring, “happy accidents”. Users are encouraged to take a lighthearted approach to their photography, and use these techniques to document everyday life.

Jaime wanted the Lomo SuperSampler so I decided to order it online and present it to her as a gift. The FedEx package came after 5 days of waiting… When Jaime opened it, she was surpirsed to see a very nice case containing the camera and in the case was an impressive book with lots of amazing photographs taken by the Lomo SuperSampler. Here is the Lomo SuperSampler, a 35mm film four-frame action camera. A cool piece of toy-like gadget with NO electronic part. It’s 100% mechanical.

The black rectangle thing on the left is the “view finder” (that does not really frame your photo). The black round ring (on the right) attached to a string is your shutter cocking cord. Pull it and the camera will take 4 shots with the an interval between each shot using each len once. The 4 moments are capture on a single film. You can simply move the camera to create great effects without knowing what you will get till you develop the film.

Wanted to post some nice photos taken by others, but due to copyrights issues, I better wait for our own. Be patience. I am sure this wouldn’t be our last post on lomography.

Lomography is the commercial trademark of Lomographische AG, Austria for products and services related to photography. The name is inspired by the former state-run optics manufacturer LOMO PLC of St. Petersburg, Russia.