I was glad to see the end of 2014 and looking forward eagerly to the coming of 2015! I am holding on tightly to Pastor’s declaration that 2015 would be a year of His restoration!

To celebrate the end of the year, we were invited to Gina’s place for dinner. We were so impressed with what was whipped up by the helper. Apparently, before joining Gina’s household, she worked for a family from Hong Kong. Right after dinner, the children had a great time playing with David’s massive collection of lego! 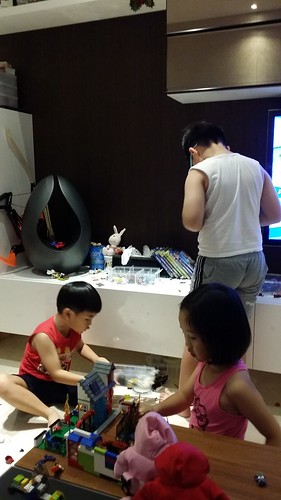 We did not plan to stay late but the children were having so much fun and we realised right where we were overlooking the Bishan Park, we would literally view the fireworks right in front of us! Too tempting to resist so we imposed on Gina and David’s hospitality just a tad longer!

As part of the Countdown festivities, apparently the Prime Minister would also appear downstairs at the park and join in to help to set a record in the most number of people wearing balloons hats at the same time! So when the husband went down to repark the car since we were staying longer, he trooped over to see what was happening and came back with all these “chicken heads” for the children to wear!

So hilarious looking! Imagine the PM also wearing this! aigoo! 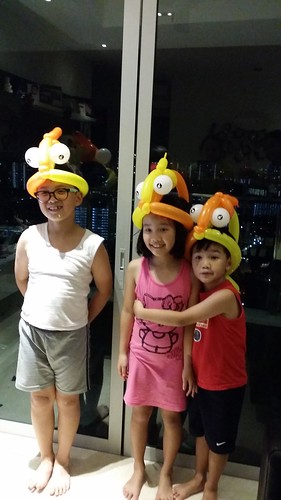 I must say the “chicken head” looked so much better on my son’s head compared to the PM’s! 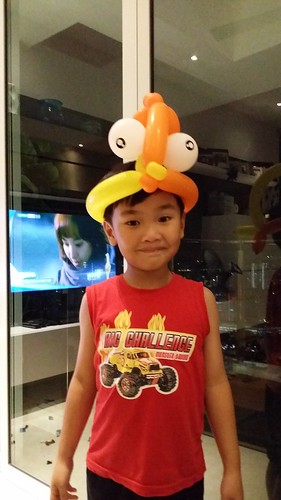 Just realised I was so busy ooh-ing and aah-ing at the fireworks that I did not have a single shot of them!

Spent the New Year’s Day resting at home and busy labelling all the children’s books in preparation for the first day of school the next day! 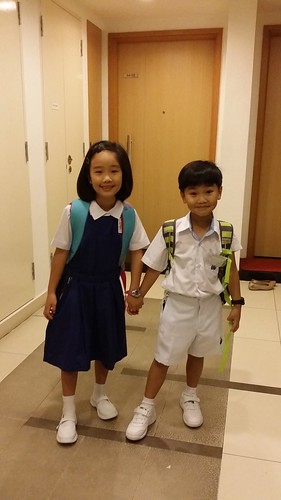 See the cute contrast 4 years ago when the little guy started nursery! 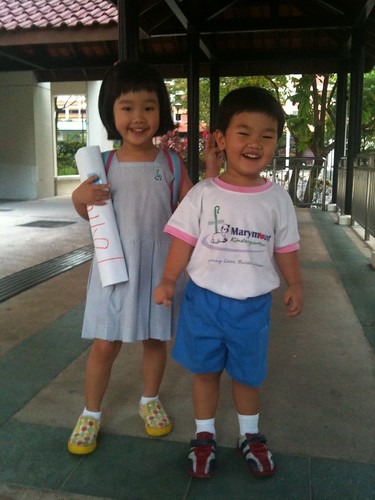 If we were to put him in a school bus to go to school in the morning, the bus would come at 6.10am which meant he would need to get up at 5.45am. That is really way too early in our books so we decided we would attempt to send him in the mornings. The journey there was pretty fast, took us only 20 mins but that was just to get into queue to drop the boys which was a whopping 15 mins! *Sweat*

And the school had a “strictly-no-parents” rule for the first few days! I guess I could understand where the school was coming from. But surely given that the first day was week zero, the school should not deprive the parents of just being paparazzi for a day, stalking the kids, taking a look at the classroom, at the classmates, capturing a shot of the chap buying his first bowl of food from the canteen?!? Anyway…

Could only take a shot of him waiting for the older boys to bring him to the classroom and that was the last I saw of him that morning! 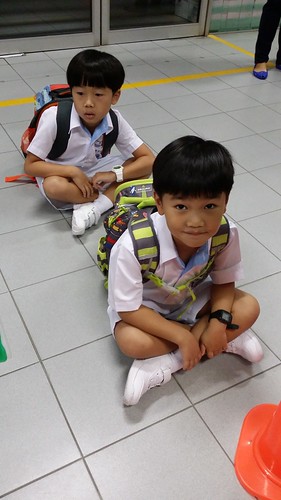 Instead I made my way to the little girl’s school and watched in regret how the other P1 parents were enjoying their little pursuits of stalking their children! The perk of the morning was when I spotted my little P3 girl on her way to the canteen, which after her initial surprise of seeing me, promptly waved goodbye and ran off with her bestie! *sulks*

I went home and vegetated until the children came home respectively. All in all, a rather uneventful first day of school I must say!